I’ve heard various thoughts on possessiveness in dogs throughout most of my life. Once I finally ended up with a dog under my roof, I figured it was time to dig a little further as opposed to what I just heard anecdotally from someone on the street (or from someone chasing their dog through the park after it wouldn’t come back when called…).

For a long time, conventional wisdom held that a dog should never be allowed to “win” a game of tug with a human, whether that meant getting to keep a tennis ball or another tug toy. The thought was this would encourage the dog to be dominant over the human  and the dog wouldn’t “know its place” in the hierarchy.

I’m not looking to sway opinions, but after a lot of thought and research, it doesn’t make a ton of sense that if every time a dog brought someone his favorite toy it was taken away, that dog would become less possessive. If he knew it was going to be immediately taken away, wouldn’t he want to try and hold onto it just a little longer? Or maybe not bring it back at all?

During yesterday’s snow, I was finally able to watch the last 30 minutes or so of Michael Ellis’s “Teaching Protection Skills Without a Decoy” DVD. The last segment is on trouble-shooting an “out” issue with a police service dog. As you can imagine, being able to get a police dog to release a suspect is pretty important. It takes a while of both training the dog as well as his handler in the DVD, but eventually you see a lightbulb come on about how previous ways of addressing possessiveness could in fact encourage the dog to be even more possessive than before. Almost reverse psychology, but worth considering.

I don’t just hand over a toy to my dog, and am not suggesting you should, either. If he puts in a good effort and gets things right, though, I do let him “win” from time to time, and while I know he’d probably like to keep most of what I give him, he will still bring it back to me, and hasn’t yet tried to assert some sort of dominance by running me over with my car… 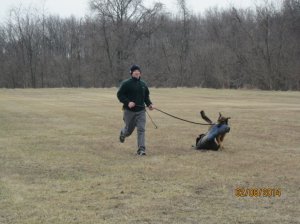